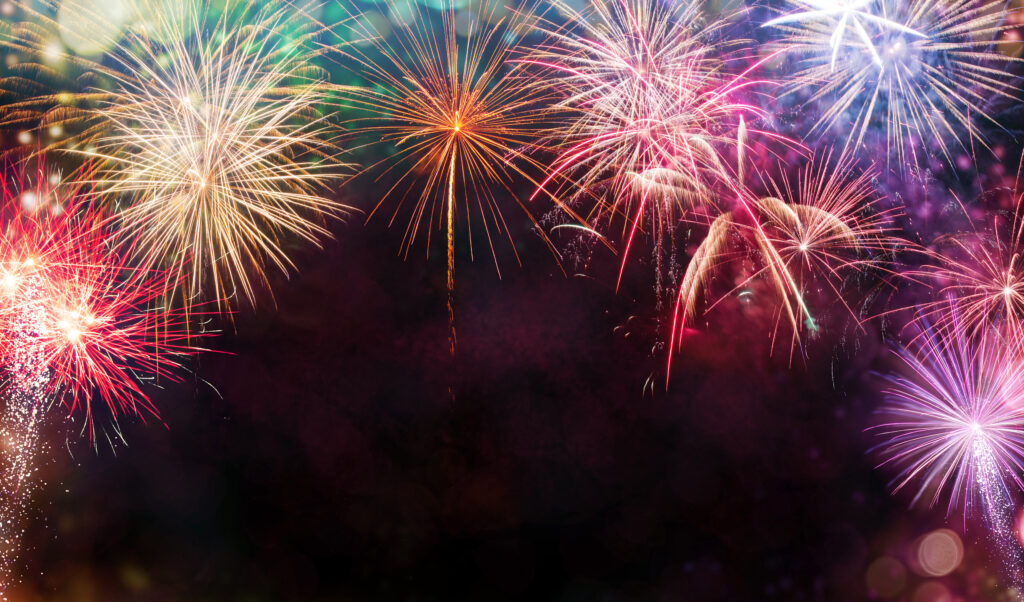 Fireworks are one of the most popular signals of festivities in today’s society. Whether it is a birthday, anniversary or a public celebration, fireworks never seem to fail to make an appearance. We see them and appreciate them all the time, but what do we know about them? other than they explode and make pretty colours and patterns in the sky. There is so much to learn about these unique pieces of art, so let’s take a look into the history and science behind fireworks.

What are fireworks and what is the history behind them?

Fireworks are a type of aesthetic pyrotechnic that is classified as ‘low explosive’ (despite the way we may perceive them). Known for their bright colours and their typically loud noises, they have become a popular part of society with firework displays being commonplace in certain areas of the world.

Originating from China during the Song Dynasty, they were used the same way we use them today, to commemorate important events. These were usually in the form of explosive bamboo stems, which were thrown into the air.

At this point, fireworks were limited in their type and colour due to materials available as well as the general understanding of these pyrotechnics. In the 14th century, chemicals were applied to these early fireworks to be able to provide colours to them, which was very useful for military smoke signals. This was also around the time when fireworks found their way into Europe, with knowledge of recipes gained by some Europeans living in China at the time.

It wasn’t until the 17th century that fireworks began to become widely popular and even then, the difficulty of acquiring materials and chemicals meant it wouldn’t be until the 20th century when they became easy to purchase in all their varieties.

Popular types of fireworks include: 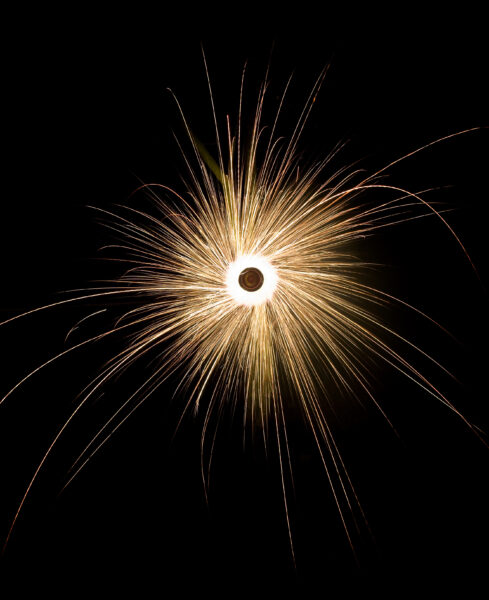 Named after Saint Catherine of Alexandria, who was sentenced to death by an execution wheel and upon touching it, it burst into pieces. With the way these fireworks erupt into a wheel of rotating sparks and flames when ignited, this name seems incredibly appropriate. 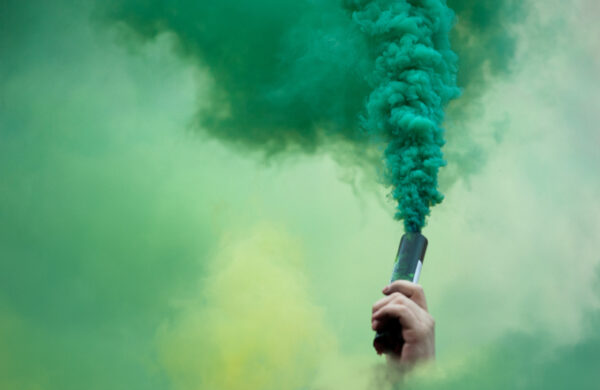 Smoke Bombs are fireworks designed to emit a smoke cloud once ignited. 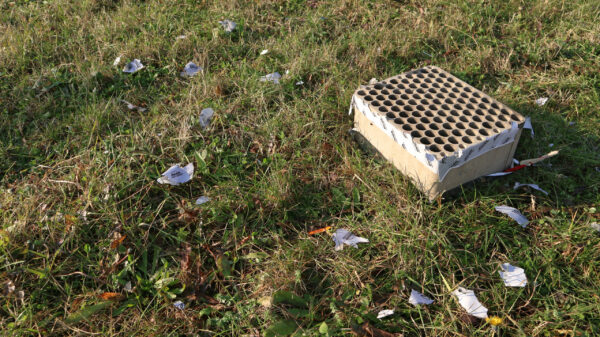 These are fireworks that have multiple tubes and contain several Roman Candles or aerial shells that are linked by a high-speed fuse. These create long-lasting explosive effects that are stunning. 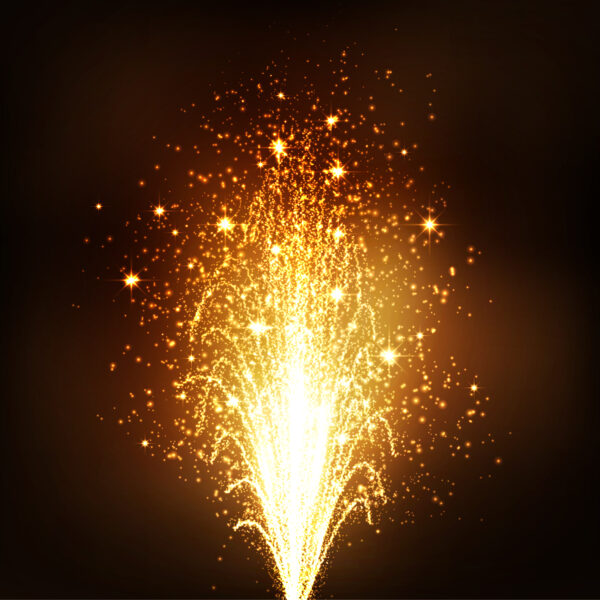 Possibly one of the most recognisable fireworks, ground-based fireworks that erupt into sparks and stars, accompanied by crackling and whistling sounds. 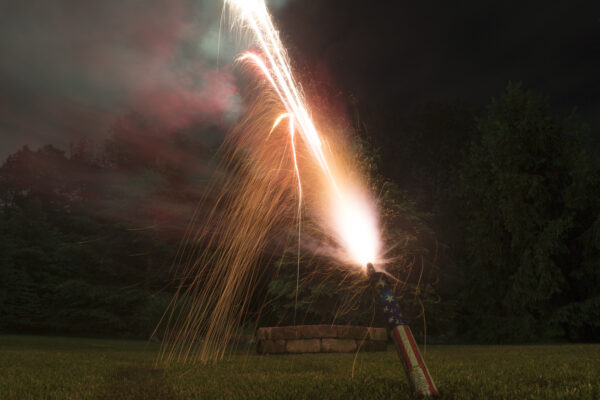 A traditional firework that looks like a long tube which fires stars and other explosive shells into colourful balls of light. 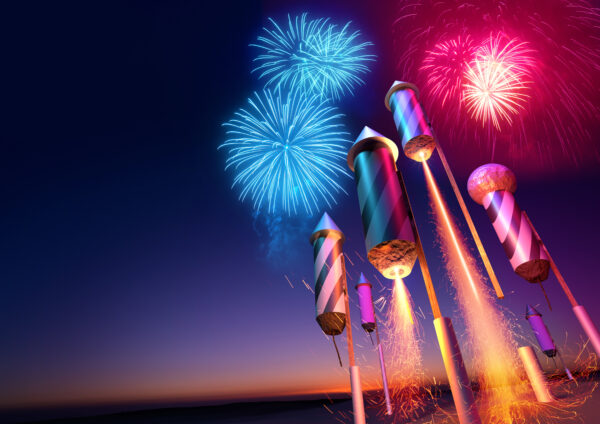 More popular in today’s generation, these are in the shape of rockets, that fire into the air at great speeds, usually creating a strong whooshing sound, leading to a large explosion.

How do fireworks work? – The science of fireworks

For a firework to have it’s desired effect, it requires a series of chemical reactions that usually happen consecutively in a short space of time. By adding heat to the equation, it becomes a catalyst for a chemical reaction in which solid compounds within the firework begin to burn with the oxygen in the air. This converts into several other chemicals, which in turn releases gases like carbon dioxide, nitrogen and carbon monoxide.

Some early chinese recipes to achieve different colours include Calcium compounds for a red colour, Lead carbonate for a lilac colour, Copper Acetate for green, Mercurous Chloride for white and Arsenical Sulphide for yellow colours.

Since then, we have found new ways of achieving these colours which are: Strontium salts for red, Calcium salts for orange, Sodium salts for yellow, Barium salts for green, Copper salts for blue, Copper and Strontium compounds for purple, white-hot Magnesium and Aluminium for silver and burning metals like Magnesium for white.

The reason why they are able to fly into the air at high velocities is because of the hot gas that is released when igniting the firework. The rapid release of this gas causes a lot of pressure that propels the firework in the opposite direction to the hot gas being emitted.

The future of fireworks

Due to the popularity of fireworks, their use in modern-day society has seen new methods of light displays be introduced as competition.

As seen in Shanghai’s 2020 New Year celebrations, it seems we are entering a new era where drone technology is becoming a competitor for fireworks when displaying festivities.

However, these drones don’t manage to capture the natural beauty that fireworks provide. While they are nice, there is something about the combustion combined with the array of colours that makes the science behind fireworks incomparable. Because of this, it is without a doubt that fireworks will remain a staple in societies worldwide.