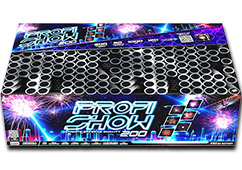 This fantastic single ignition firework is available in two versions. A 200 shot straight firing version and a 200 shot mixed shape version. This is the MIXED firing version, great if you have plenty of space and really want to fill the sky!