It is time for the Las Fallas Festival once again, and Firework Crazy for one cannot wait!

The fireworks displays for Las Fallas actually kicked off this past weekend, with an opening display (Mascletà) on Saturday evening followed by displays throughout the day on Sunday, including ones at 7:30 and 8:30 in the morning! What an experience to wake up to!
Las Fallas fireworks will continue daily in some shape or form – other than today (29th February), maybe due to something superstitious around leap years – until 19th March. Below is a video of a fireworks display from last year’s Las Fallas.


The biggest and best displays take place from 15th – 19th March, with afternoon fireworks accompanied by displays kicking off at midnight as well as at 1:30 in the morning.
So, we’ve told you all about the Las Fallas fireworks, but what is Las Fallas and where does it happen?

Las Fallas is an annual festival held in the beautiful Spanish city of Valencia. This is Valencia’s largest event of the year and is embraced as such by the population of the city. Las Fallas is a very popular time to visit Valencia and is usually the peak time for tourism outside of the summer months.
While Las Fallas is centered around one week – in 2016 this mirrors the largest fireworks displays from 15th – 19th March – events take place throughout March as the city prepares to welcome the spring months.
Most of the fireworks displays during Las Fallas take place at the Plaza del Ayuntamiento – the main city square. The full fireworks schedule, including Mascletà, which we will talk about now, for Las Fallas is in the image below.

Here’s a look at some of the other events that take place during the festival. You can also learn more from the Visit Valencia website.

Taking place across the month from 1st – 19th March, Mascletà is a daily gathering in Plaza del Ayuntamiento, and is a unique display utilizing gunpowder explosions to create a distinct sound. 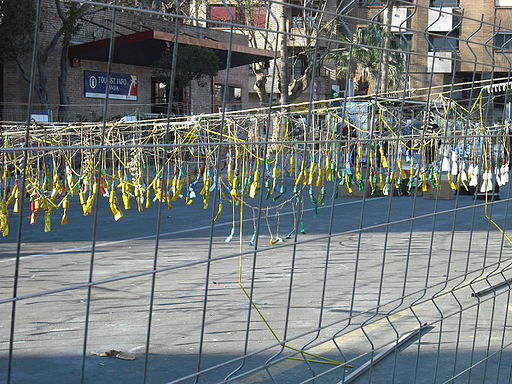 Not your traditional fireworks display but great fun all the same, and a great way to begin the afternoon before heading off for a nice glass of wine and some amazing food!

This isn’t an event in itself, but is definitely worth checking out. La Plantà is when the men and women of Valencia who have created monuments and sculptures (the Fallas) for the festival work through the night putting them up, ready for display from dawn the next day and throughout the duration of the festival.

This year, this will happen overnight on March 15th. If you can’t see it as it happens but will be in Valencia, you will be amazed at what you find the next morning!

After the event jury visit the estimated 750-plus Fallas that have bee created, 17th March sees the prize giving ceremony where the winners are crowned.

Occurring across March 17th and 18th this year, this event sees all the sculptors take place in a parade from their home district to the city’s Plaza de la Virgin, where they make an offering of flowers to Our Lady of the Forsaken, who is Valencia’s Patron Saint. This event begins at 4pm and usually continues well into the evening. By the time it concludes, the display of flowers will exceed more than 15 metres in height.
Check out the below video for an idea of the finished article.

The closing of Las Fallas is La Cremà. This sees all the sculptures created burned, starting with children’s entries and followed by the adults. This kicks off at 1am on March 19th, with the final Mascletà taking place at the same time to mark the occasion.

If you ever travel to Valencia outside of the Las Fallas celebrations, you can learn all about it at Valencia’s Fallero Museum and the Fallero Artists Guild Museum.
Can’t make it to Las Fallas or to Valencia at all in 2016? Have your own displays with fireworks from Fireworks Crazy – just remember it’s illegal to hold displays after 11pm outside of Bonfire Night and New Year’s Eve here in the UK!