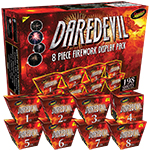 The new daredevil display pack from Standard Fireworks contains 8 barrages for a total of 198 shots lasting 3:20 non-stop. Each firework is cat F2 and suitable for an 8m garden and there’s no boring fireworks here. Each is packed with a huge variety of colours and effects and every one is fanned or contains a mixture of straight or fanned effects. Designed to be lit in the order printed on each item for the best display, but of course you can choose to light them in any order you wish. Add in a few rockets between each cake and you’ve got yourself a great little display.

Daredevil 2 – 25 shot, fanned cake firing in volleys with each volley containg 3 of one effect and two of another to create what we call a butterfly effect in the sky.

Daredevil 4 – 28 shot, mixed shape with some great effect such as red ghost and silver wintersweet and some nice red and green falling leaves.

Daredevil 5 – 25 shot, z and fanned volley firing barrage, some nice gold glitter palms with coloured stars sweep left to right before a volley of crackling comets and a great finale of mixed colured stars and chrysanthemum.

Daredevil 7 – 21 shot, z-firing. Big bursts in this one of deep gold palms and coloured stars, a sweep of whistling tails before a finale blue, gold and time rain.

Daredevil 8 – 27 shots of z-firing bursts with volleys of thick comets between each row.

Now I make that 199 shots, but whos counting!