2016 marks the 15th year of the Malta International Fireworks festival. Although the event pre-dates Malta’s accession to the European Union in 2004, today the Malta International Fireworks Festival forms part of the annual celebrations that mark this historic occasion.
The event, as always, is organized by the Maltese Ministry for Tourism in conjunction with the Malta Tourism Authority.
Visit the Malta Tourism Authority’s Corporate Website.

Malta International Fireworks Festival 2016: When Are the Displays?

This year, the Malta International Fireworks Festival will be held over the final three Saturdays in April, which are the 16th, 23rd, and 30th of the month. If you are unable to get yourself away on holiday over the Easter break, which is early in 2016, this is a great place to head if you’re able to get away in April.
The firework displays themselves are up there with the very best any festival has to offer. As has become the norm, the displays are presented in pyromusical format, and both Maltese and overseas fireworks companies will be involved. As with all events of this stature, there’s an element of competition involved. The below video features last year’s winners, Lourdes Fireworks Factory, based in the small village of Qrendi in the south of Malta.

At the time of writing, the only venue to be confirmed was for the closing event and displays on April 30th, which will take place in Valletta’s historic Grand Harbour.

Keep visiting http://www.maltafireworksfestival.com/#!programme if you’re going to Malta in April to see when the venues for the other displays are announced. Wherever you’re going to be in Malta, it is easy enough to drive around the island to get to each location; if you’re there for over two weeks you could easily see all three displays.

The use of fireworks to celebrate a historic event in Malta is fitting, given the long tradition of fireworks on the island. It is thought the use of fireworks in Malta goes back to the year 1099 and the Knights of the Order of St. John, and that a combination of firework devices invented in Malta as well as those brought to the island across the sea as fireworks began to stream into Europe from China were used.
Back then, fireworks would be used to mark important occasions, such as the election of a Grand Master of the Knights of the Order of St. John. As a deeply religious, Roman Catholic country, the choosing of a new Pope would be another such occasion. 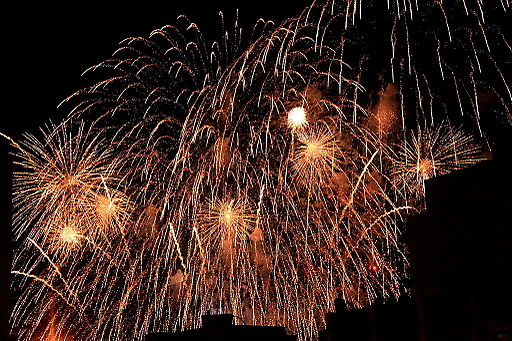 Fireworks manufacturing would later develop into a craft in the 19th and 20th centuries as Malta would mark British events. After becoming independent from Great Britain in 1964, the manufacturing, along with Malta’s love of fireworks, continued.

While the Malta International Fireworks Festival is the largest and most popular event in the calendar when it comes to fireworks on the island, various events and occasions that take place across Malta’s villages use fireworks throughout the year.
Check out http://www.visitmalta.com/ for a full list of events taking place in the country in 2016.

Can’t Make it to Malta?

Fear not, simply buy fireworks from Fireworks Crazy instead, and have your own fireworks festival at home, whenever you wish!