HAPPY NEW YEAR TO ALL OUR CUSTOMERS

How Are Sparklers Made?

It’s hard to find a person who isn’t attracted to the glittery fun of sparklers. These crackling sticks of fire are among the most sold fireworks on our website and the central entertainment of many events from Bonfire Night to New Year’s Eve. 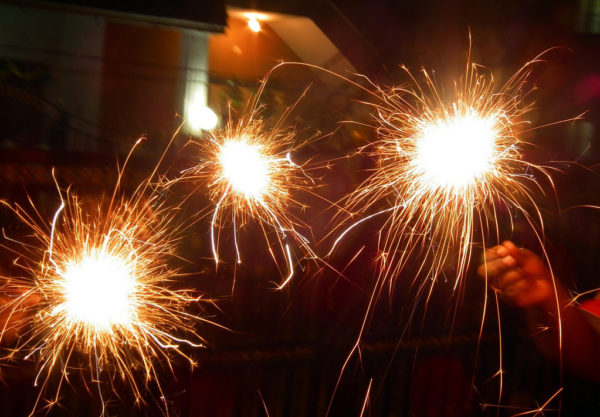 We’ve looked at the science behind the traditional types of fireworks, but what about sparklers? Here’s a look at what sparklers are made of and the manufacturing process that gives them the unique and entertaining look.


What Are Sparklers Made Of?

Sparklers are essentially made by using three chemical components: a metal fuel, an oxidiser and a binder. It’s also possible to add certain other elements to sparklers in order to enhance the effects or change colours, for example, but the three components are the building blocks of sparklers.

This specific firework is typically made from a metal wire, which is then coated from one end with a mixture of the metal fuel, the oxidiser and the binder. The most commonly used wire is made of iron, which can then be coated in typically four different fuel chemicals:

The above four are the most common colours you see on sparklers. But you can add other chemicals to this metal fuel to give it alternative range of colours. For example, certain salts can create different greens, reds and blues.
You can find out more on the firework colours from our previous post.

The oxidisers in sparklers have a crucial role. When the oxidisers are heated as the metal fuel starts burning, they began to decompose and this creates oxygen and other gasses.

In short, the oxidiser ensures the sparkler has the effect and doesn’t just end up looking like burning metal. The process is behind the little sparklers jumping around the wire creating the crackling look.

The most commonly used oxidisers include metal nitrates, chlorates or perchlorates, and potassium nitrate.

The final component helps keep the other two components together. Since both the fuel and the oxidisers are simply chemicals in a paste-like form, the binder ensures they stick together and to the wire.

There are different chemicals, which can act as a binder, but the most commonly used is dextrin.In addition, the binder and the above two components are mixed with some water to make the paste smooth and easily applicable on the wire.

Interestingly, some forms of dextrin are also found on foods and are used for medicinal purposes!

Constructing the sparklers is quite a simple task and mostly automated, unlike fireworks. It starts with a machine cutting the metal wires to a desired length – as you might know there are all sorts of sparklers from long to small.

The wires are then moved along by the machine and place in a position where the mixture of the above chemical components is applied on the wires. The wires are dipped from one end to the paste mixture and allowed to set for a moment. They’ll then be dipped a second time to insure the paste is strong enough for the effect to work.

The sparklers will be allowed to dry fully; often up to a week to ensure the quality is good. They will then be packed and sent off to the retailer. Then it’s up to you to enjoy using them at your parties and events!